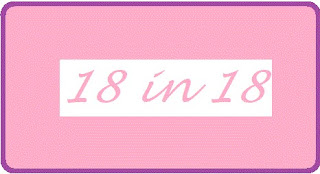 What a short month!  I know it’s actually the shortest month but it also went very quickly.  Here’s an update on the things I’ve achieved or made progress on.  Or not!  Nick and I both had colds during the month so that didn’t help.  Thankfully we’re both well at the moment but a week of snow has left us all with a bit of cabin fever.

1.     Bake once per month (bread/cake/biscuits etc) Well last month I claimed the bake on 1st February as a January offering but now, thanks to no other baking I’m back to claiming it for February!  I have family coming for dinner on Friday so maybe I’ll get something made for then.
4.     Plan a lunch date/date night with Nick once a month (theatre/cinema/meal)
Well we did get out a couple of times together so that’s a plus but not sure that a get together with all his siblings or attending a quiz night count as dates.  Both were fun though.
8.     Walk at least 3 times per week – I managed this although some of the walks were more of necessity than anything else such as shopping or library trips but I haven’t used the car much this month so that’s a win!
12.  Complete my reading challenge (52 books for the year)  Still on track.
In February I read:
All the Light We Cannot See – Anthony Doerr
Three Things About Elsie – Joanna Cannon
Stolen Marriage – Diane Chamberlain &
Close to Home – Cara Hunter
Details and reviews can be found on my Goodreads site.
13.  Keep my bullet journal updated – work in progress but going ok.  I need to find a regular time of day to do this.
14.  Blog at least once per week (plus regular memes) – almost achieved.  The month started well but I faded a bit in the last week.  Although I have started planning some A-Z posts.
15. Take more photos – I need a little voice in my head reminding me to do this.  Or an app on my phone.  Maybe there is one.  Let me know if so.  After all my Fitbit reminds me to walk every hour.  I have taken some pics for example when it snowed and I cooked today and took photos but I’m still pretty useless.
17. Do more crafting – update on blog.  Well the main part of the baby blanket I’m working on is finished and I’m now getting the edging done.  I need to make 3.6 metres of it (although I need to check the dimensions of the blanket to make sure it matches!) and so far I’ve done just over 1 metre. 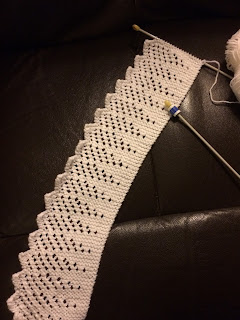 18. Try out a new recipe each week – again I didn’t manage this every week but during February I cooked 5 new recipes which averages out to one a week +1 You’ll have to trust me on this as again there is no photographic evidence but I made the following:
Pork chops with butternut squash
Chicken & Corn casserole
Moussaka
1 pot chicken stew
Tiramisu

Some of these (such as Moussaka and Tiramisu) I have made before but these were all different versions which I count as new.
Actually I do have evidence of the Moussaka: 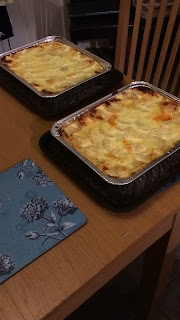 I made these two today (four actually – two were still cooking) which I will freeze.  We will be hosting Nick’s siblings next Friday for food and then we’re going out to one of our local bars so I’m trying to be prepared.  There will be 14 of us.

Cooking ahead makes for a lot of washing up.  This was after fully loading the dishwasher: 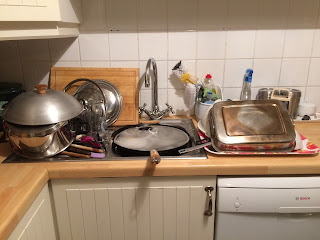 Nick had also made a large quantity of Bolognese sauce which is how the wok came to be used.

Email ThisBlogThis!Share to TwitterShare to FacebookShare to Pinterest
Labels: 18in18