End Game by David Baldacci
My rating: 3 of 5 stars

Will Robie and Jessica Reel are two of the most lethal people alive. They're the ones the government calls in when the utmost secrecy is required to take out those who plot violence and mass destruction against the United States. And through every mission, one man has always had their backs: their handler, code-named Blue Man.

But now, Blue Man is missing.

Last seen in rural Colorado, Blue Man had taken a rare vacation to go fly fishing in his hometown when he disappeared off the grid. With no communications since, the team can't help but fear the worst.

Sent to investigate, Robie and Reel arrive in the small town of Grand to discover that it has its own share of problems. A stagnant local economy and a woefully understaffed police force have made this small community a magnet for crime, drugs, and a growing number of militant fringe groups.

But lying in wait in Grand is an even more insidious and sweeping threat, one that may shake the very foundations of America. And when Robie and Reel find themselves up against an adversary with superior firepower and a home-court advantage, they'll be lucky if they make it out alive, with or without Blue Man...

Another action packed thriller from Baldacci.  Lots of red herrings but a bit far-fetched at times, Robie & Reel might have 9 lives like cats  but I feel they have should have used them all by now.

Z is for Zombie 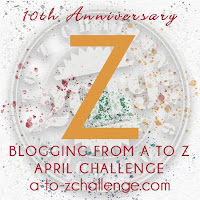 This year I decided not to tie myself to a theme.  I wanted to do something that felt more like writing rather than composing posts.  I didn’t want it to be a story that had to be followed from start to finish so what I’ve ended up with are: “Conversations in my Head”.

Hmm I think Wendy is looking a bit like a zombie today.  She’s very tired after two days of Grandchildren.  (Rory yesterday & Nathan today.)  This A-Z challenge thing is also quite tiring.  She managed to get all her posts done in advance (although not all of them before the challenge had started) but it’s still time consuming checking out her comments, other blogs, leaving comments etc.

But this evening I think she’s quite relieved that it’s come to an end.  Well apart from checking out more blogs and catching up with the sites she regularly follows.  This blogging lark is certainly time consuming and then of course there’s Facebook and something else called Lifecake.  I think that must be the one where all her kids upload pictures of the babies because she spends a LOT of time checking that one out.  And Instagram.

Thankfully she doesn’t really do Twitter or Pinterest.  Hmm maybe I could take over her Twitter feed.  I could probably have lots of fun with that.

Alice, you may think I look like a zombie, but zombies don’t actually exist and I can hear every word you’re saying.

Absolutely not.  Anyway the challenge is finished now.  We’re done.

Done?  You think you can get rid of me?  Just like that.  Z doesn’t stand for evicted.

No although I’m sure between us we could think up a z word that means to expel something from your head.

Something!  I’m a very important SOMEONE and I have no intention of being expel or zapulted out of anywhere.

I was rather hoping you’d say that.  I’ve got used to you now Alice.  So maybe I won’t zapult you just yet.  It’s quite good to have a sounding board and a different perspective on things.

Well it’s good to know I won’t be homeless and I do like to have the last word.

Umm, that’s my only condition Alice.  I’ll always have the last word.