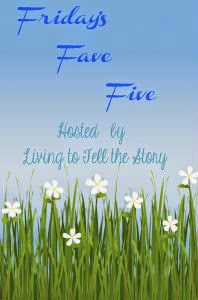 Friday's Fave Five is hosted by Susanne over at Living to Tell the Story.
The idea is to step back and think about the good things from the previous week and list your favourite five.  Then pop over to Susanne's blog and join up with the other people taking part.
I've had a rather lazy, unproductive week.  We're still in limbo with our house move so that is not helping with my motivation but there were still some good things going on:
1)  A nice delivery from my online book group organiser (I won a competition) 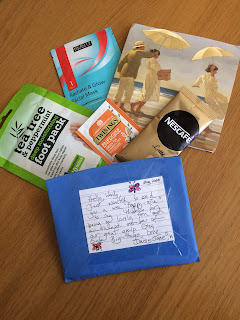 2)  A visit to Grandson Rory and his Mummy & Daddy on his birthday.  We stayed outside their flat in the communal garden but they had the window wide open and we could see in and chat to them all.  We'd decided that was better than trying to socially distance in the garden with Rory.  He wouldn't have understood.  He was very pleased to see us but was ok with being separated by the window. 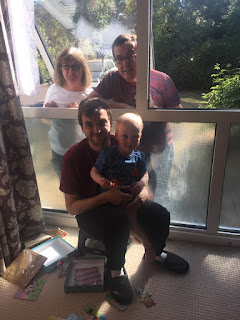 3)  Lots of reading time.
4)  2 of my DILs had scans this week and the babies are all fine.  We now know the sex of 2 of them, the others want a surprise but no reveals here.  You'll just have to wait until they arrive!
5)  Our Government has slightly relaxed lock down rules - we can now meet in groups of up to 6 people outside and socially distanced.  More shops are also due to open in a couple of weeks but only if social distancing can be maintained.
Of course that's a good thing but the situation is still tricky.  Schools have also been allowed to reopen for certain year groups but many have chosen to stay closed as they're not sure it's safe to open yet.  Our death rate is reducing but very slowly, as are the numbers of infections.  It's very hard as there have been lots of examples of larger groups flouting the rules.  There have been a number of BBQs held on the common by our house which is also a fire risk given the lovely warm weather we've had.  Thankfully there has been a change in the weather the last couple of days bringing rain and lower temperatures.  Hopefully that will reduce the number of larger gatherings.  I'm not sure what effect it will have on the protests planned following the events in the US.  There have already been a number of protests which although more peaceful than in the states it has still meant large groups of people which will not help to stop the virus spreading.
We are still being very cautious and just doing our daily walks.  We've managed to get shopping deliveries each week (or a click and collect) which has meant us being able to avoid going into shops.
Tomorrow we have another family quiz via Zoom to look forward to.
Enjoy the weekend.
Posted by Wendy at 20:39:00