Just a quick catch up for now.

Saturday was a busy day shopping for a few bits and pieces, including presents and also changing Christmas presents.  I stupidly bought my hubby and sons all the same socks.  Which is fine for now as they all live in different places.  But when our youngest son moves back in April I could just see the scenario where hubby would end up losing all his new socks as son would be looking for a pair and claim his Dad's to be his own.  He looked all offended when I talked about this but my worry is based on previous evidence of socks and underpants going missing when son's laundry needs doing!

Hubby had gone out to see some cycling improvements that had been done to a nearby area but on his way back he got a call to say his Mum wasn't great so a few of them ended up at the hospital only to find she had rallied again and seemed fine.  The nice thing about that was that a few of us ended up going to his brothers for dinner afterwards.  Fortunately he'd been making a big pot of chilli before going to the hospital so there was plenty for all of us.

On Sunday we went to a family gathering at one of hubby's sisters.  Her eldest son is about to go off travelling.  He's starting in India but will take in Thailand, and nearby countries and then on to Australia and New Zealand.  It was a farewell gathering for him but we were also able to say hello to the latest two additions to the family. 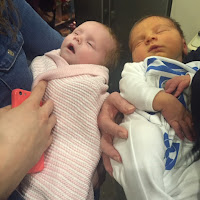 Introducing Poppy and Teddy our newest great niece and nephew.  They are not twins but 2nd cousins.  (Hopefully I've got that right - their parents are first cousins.)  Poppy was born just before Christmas and Teddy arrived last Monday.  They are the 6th & 7th Great Grandchildren respectively but so far Poppy is the only girl.

Yesterday I managed to catch up on stuff at home but also fitted in a visit to Nick's Mum.  She seems to be improving but she is still very muddled and hallucinating quite a bit.  They are doing physio with her though - she was out of bed and sitting in a chair while we were there so we have to  hope she continues in the right direction.

Well that's me done for now.  Off to look at tomorrow's Hodgepodge questions.

Email ThisBlogThis!Share to TwitterShare to FacebookShare to Pinterest
Labels: catch up, family