Well technically I'm a day late but it's been that sort of week. 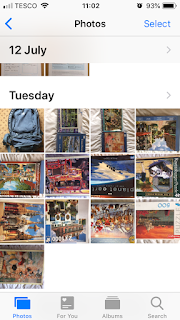 This is a screen shot of the photos I took this week.  Not very exciting.  Apart from the rucksack they're all of jigsaws that I've done.  I was trying to see if any of our kids wanted them before I add them to the "pass on" pile in my house.  As in pass on to someone else rather than just trash.
We're still sorting things into that pile or the trash pile, slowly.
We feel a bit in limbo again this week - the survey on our house was done on Tuesday 7th and we've yet to get any feedback on it, despite chasing the estate agents.  We don't know if our buyers have had the report back or not and consequently we don't know if there is anything to worry about, or not.
I'm sure the optimists out there are shouting out "no news is good news"  or "don't worry until there is something to worry about" which of course I get.  I'm just not very good at doing it.  Of course there are various scenarios from this, the worst case being that there is something very wrong with our house, the buyers will pull out and we will be back at square one with a problem to solve.
I know that this would not be the end of the world.  There are things that could happen that would be much worse.  And of course we would deal with whatever is thrown at us.  It's just the not knowing that's frustrating.  It deters me from making much effort in the house.  I'm not good at tempting fate so the plans to do a really thorough deep clean is on hold but the longer we wait to move forward the less time we may have if suddenly everything takes off and we head for the end of August deadline that has been proposed.
The Covid-19 situation is not helping.  Especially now that restrictions are being eased and the messages given out by the Government are far from clear.  They seem to be passing the responsibility for keeping safe onto employers and the general public.  Our PM even seems to think that things might be quite normal by Christmas.  It would be lovely if he's right but I'm not convinced.  Wearing masks, keeping apart and avoiding certain activities is not normal!  But I've ordered some pipe cleaners and plan on making some more masks so that we're prepared although we're still being extra cautious.  It will keep my idle hands and busy brain occupied.
In other news Hubby and I actually sat down and watched a film together last night.  "3 Billboards outside Ebbing, Missouri" was on.  I'd say it was an OK film.  I didn't like the ending and it was hard to follow what was being said at times due to the accents and the sound seeming a bit muffled and of course if you don't like swearing it's one to be missed.  During the adverts they were promoting "The Post" which will be shown next week.  That's the last film Hubby and I went to see at the cinema.  Thankfully there are so many films available on cable/Netflix that we don't miss going to the cinema. (We don't even miss the popcorn as we're not lovers of it lol)
On a final positive note we're seeing Grandson Rory this afternoon.  Can't be miserable around him!
Posted by Wendy at 13:37:00