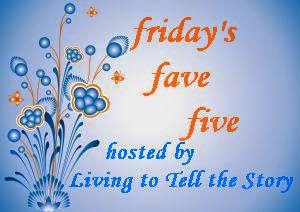 Well it's Friday again so time to look back on the week and highlight some blessings.  This meme is hosted by Susanne over at Living to tell the story.
Pop over there to see who else is taking part and to find out how to join in.
I skipped joining in last week - it had been a funny old week and I was feeling fed up with the house process but things have been better this week so here are my 5:
1) We had a lovely time with Rory last Sunday.  It was our Son & DIL's 6th wedding anniversary! That time has flown!  Anyway we fed Rory, bathed him and then I put him to bed.  He's in an ordinary bed now but he made no fuss when I put him down.  He likes you to sit with him until he falls asleep but I actually left him when he was sleepy but not right asleep.  I expected him to tell me "No Nanny" but he didn't and when I checked on him shortly after he was sound asleep.  I hope the next baby is as good.
2)  There is room to move in my bedroom again.  We moved our daughter's stuff that was in the loft down into our bedroom a couple of weeks ago and it was driving me nuts.  We moved it all to our son's garage last weekend.  We just managed to fit everything in the car so we only had to do one trip! 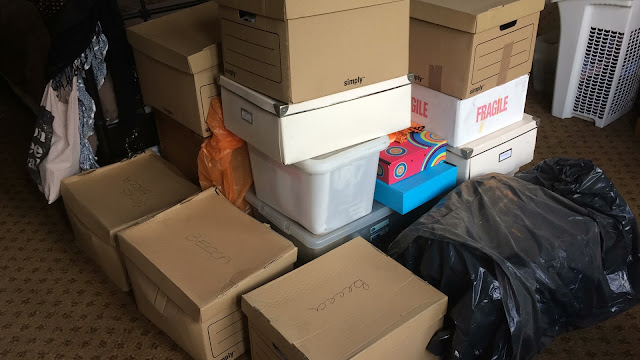 3.  They did a drain survey on our house this week and it seemed fine.  This prompted us to get one done on the house we're buying and that was ok too.  Breathing a sigh of relief lol.
4.  Our downstairs toilet had started making a strange noise.  Our retired family plumber suggested it was probably the inlet valve & washer that needed changing.  A relatively easy job for any DIY minded person.  Which hubby is not!  But that's why we have insurance for things like that.  I went online to book an appointment at around noon and found I could get one for the same afternoon!  A lovely young man came and had it fixed in no time.  He seemed very competent and he was extremely chatty!  Probably took longer explaining everything etc than he did actually fixing it.  But hey when you're spending a lot of time cooped up inside just with hubby someone different to talk to is a bonus lol.
5.  We're gradually getting rid of our unwanted items.  We've used sites called Freecycle and Trash Nothing where you can list items you want to give away and have had interest for some of our items.  Hopefully some will be collected today.  A friend of Nick's who does car boot sales said he would be happy to take stuff as well so we're trying to collect everything together in the next day or so for him to collect and then see what we're left with.  I need the house fairly tidy by next weekend as our buyers are coming for another look.  They've agreed to keep our Freezer and Tumble Dryer which are in the cellar so that saves us the job of getting them out of the cellar and disposed of.  They also want a wardrobe and chest of drawers that we don't need in the new house so that's another disposal job avoided.  We seem to be going in the right direction.
I could also add 2 more things to my list - we discovered an I-Pod docking station yesterday that Hubby thought didn't work too well but I managed to get it connected up with his hi-fi system and it sounded fine.  He's pleased about that!
We also found that our video player still works despite languishing under the TV for longer than I care to remember.  Yes we still have videos - including First Communion videos of our kids which we will have to embarrass them with at some point.  I'm thinking of getting a treadmill for the room in the garden at the new house and although we might not be able to get TV reception down there I'm sure I could watch DVDs or videos while using the treadmill.  Sounds like a plan to me.  Making plans is good!
Although with 3 grandbabies on the way and the possibility of our daughter trying to move house I'm not sure when I'll have the time lol.
Enjoy the weekend.  We're babysitting Nathan tomorrow and our eldest son is coming down from Nottingham.  Will be lovely to see him - last time was in February!
Posted by Wendy at 11:33:00