A bit of News!

Well we finally got some feedback on the survey done on our house today.
Our buyers got the report back last Wednesday but didn't e-mail the agent until late on Saturday so we didn't get to hear about it until today.
Apparently there was nothing "devastating" in the report but it did throw up a few things they weren't expecting relating to gas, electrics and the roof.
As far as I can tell the issues with the gas and electrics was about having safety certificates for them.  Which we had already forwarded to our solicitors who I'm sure will have forwarded to their solicitors.  Left hand talking to right hand????
Anyway they've now also been sent to the agent to send to the buyers direct.
We've no idea what the roof issue is but hopefully we'll know more in a day or two and then we can see what needs to be done to resolve the problem. 🙏
Feels like two steps forward one back!  But at least we've had some feedback at last.
On a brighter note we drove over to visit one of hubby's sisters today and were surprised when 2 more sisters turned up with their husbands.  We sat socially distanced in the garden.  It was lovely to catch up with them.  First time we've seen any of them since we were locked down in March.
And here's a pic of Rory from yesterday - he does love playing with cars - he spends ages just lining them up them rearranging them! 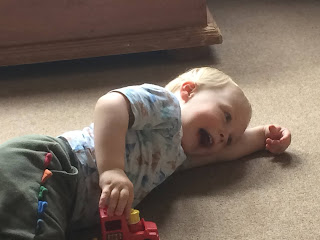