Wednesday's Hodgepodge is brought to us courtesy of Joyce at
From this side of the pond
Pop over there to see other posts and if you want to join in add the link to your Hodgepodge blog post to the Linky List at the end of Joyce's post and don’t forget to visit at least your neighbours on the list.

Well better late than never!
1. January is National Mentoring Month. Have you ever had a mentor? Been a mentor? How would you rate the experience?
Never had a mentor and never been an official mentor but often felt like one when I worked in the school.  It was satisfying at times but often frustrating.
2. What current trend makes no sense to you?
I’m not one for following trends so I don’t have an opinion on this.
3. I saw a cartoon on facebook highlighting a few 'weird' things that make you happy as an adult. The list included-writing with a nice pen, having plans cancelled, freshly cleaned sheets, eating the corner brownie, cleaning the dryer lint screen, and sipping coffee in that brief time before anyone else wakes up. (Credit for the cartoon goes here) Of the 'weird' things listed which one makes you happiest? What is one more 'weird' thing you'd add to the list?
Some of those are weird (cleaning the dryer lint screen?) but sipping tea in peace and quiet before anyone else is up would be my favourite of those.  One to add?  Dealing with all the e-mails in your inbox on the day they arrive.  Yes not many, including me, will be able to admit to that but it’s a nice thought.  I swear e-mails multiply if left to their own devices.
4. What's the last good thing you ate?
Good as in tasty?  Some vanilla ice cream Monday evening.
Good as in good for me?  I made a spinach and cheese lasagne last week – I wanted to do a vegetarian dish.  Everyone else loved it but I won’t be making it again for me.
5. Describe life in your 20's in one sentence.
It was a time of big changes: marriage, motherhood, moving and also loss.
6. Insert your own random thought here.
So grateful for our NHS again this past week.  Poor Nathan developed Bronchiolitis and needed 2 nights in hospital to help with his breathing and feeding.  He’s home now and seems to be over the worst but just knowing the facilities are there takes a load off your mind.  This was taken after he was home but you can tell he's still not 100% - apparently the cough could last several weeks but hopefully he can stay clear of the hospital. 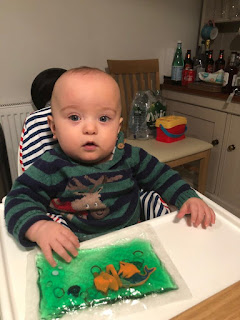 Email ThisBlogThis!Share to TwitterShare to FacebookShare to Pinterest
Labels: hodgepodge