I is for (Highbury &) Islington 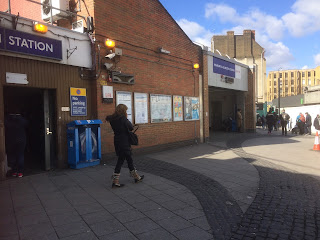 The reason I chose it over Ickenham is because it’s the nearest station to where my daughter lives so I pass through it fairly regularly.  It’s a busy interchange of several overground branches as well as the busy Victoria Line.  We have two ways of getting there, either via Stratford using the TFL Rail line and then the Overground.  Or we can start on the Overground and change at Blackhorse Road for the Victoria line.

It looks a bit of a mess outside when I took these photos on 7th March.  The station is right by a large junction known as Highbury Corner.  The railways run under the road and the bridge is currently being strengthened. 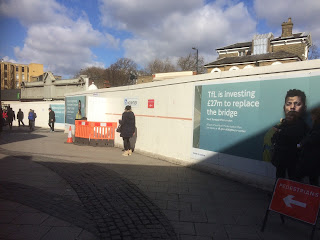 This is also the station you need if going to watch Arsenal play at the Emirates Stadium.
Islington is quite a trendy area of London, Upper Street just around the corner from the station has lots of nice places to eat.  There are also big houses in the area and quite a few public green spaces.  My daughter’s flat faces onto Canonbury Square which has a garden in the square.

Also on Upper Street is the Union Chapel. 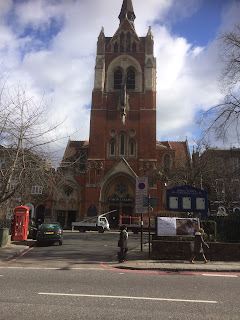 This is not only a working church but it’s also an award winning venue.  My hubby and youngest son were fortunate to see Adele perform there before she became famous.

The other “I” station is:
Ickenham

Next stop J is for ….?  Check back tomorrow to find out.