R is for Regent's Park

Of the R stations, Redbridge is the nearest to home but the only distinctive thing about it for me is that it is sited on a large traffic roundabout and I've never used the station.

I opted then for the more scenic Regent's Park.  Except of course the station isn't particularly scenic at all. Another one where all the action is underground.

What it did have though was lifts!  It was the first station I've visited for the challenge with lifts but it was busy so getting a photo was too difficult.

Fortunately the surrounding area is better and just across from the station is Regent's Park.  It wasn't the best of days when we visited to get some photos but it's given us a taste of the park and we'll go back in the summer.  One of the things we want to see is all these rose bushes in bloom. 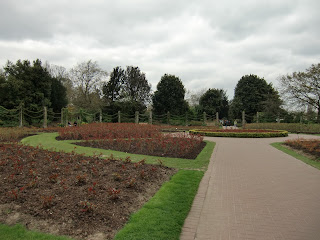 This is the Queen Mary Rose Garden with over 12,000 rose bushes of 400 varieties.
The park was designed by John Nash and also includes an open air theatre and London Zoo.

I have a vivid memory of visiting the zoo as a child and running up to a wall that circled a pit, looking over the wall and being terrified by the snakes inside.  Of course that's a totally false memory, probably linked to my phobia of snakes, because the snakes are kept in the reptile house not a pit.  Even thinking about them makes my skin crawl.

Years later I visited the Zoo with my mother and my young niece and nephew.  Of course the children wanted to visit the reptile house but my mother flatly refused to go in so I had to go with them.  It's very difficult to walk through a reptile house without looking at the reptiles!

I took a few more photos in the park: 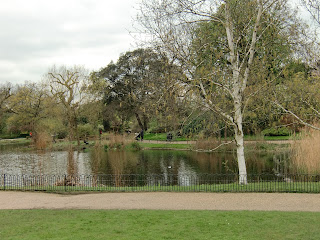 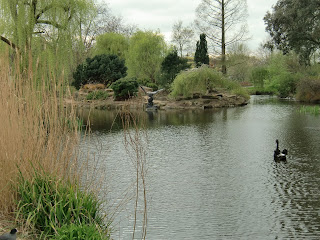 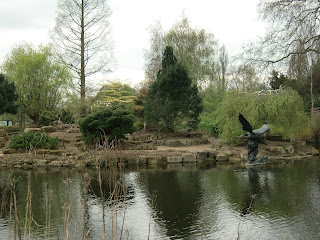 Couldn't resist this one.  He clearly knows there can be some good pickings in rubbish bins.

I also took this picture. 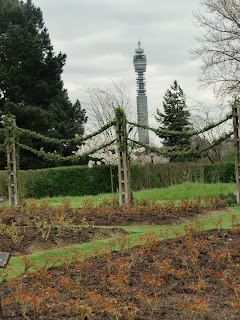 It is a communications tower that is owned by BT (British Telecommunications).  It's now known as the BT Tower but has been known by other names over its lifetime including the Post Office Tower.  It was constructed in the 1960s and at the time was the tallest building in London.  It seemed unusual to us that, considering all the skyscrapers in London, we could get a photo of it without any buildings near it.  Of course when you refresh your memory of what its purpose is, transmission of microwaves, it makes perfect sense that it is not hemmed in by other buildings.

You probably think I'm waffling again.  After all what has this tower to do with underground stations?  Of course you're right, nothing!  But we happened to visit Regent's Park on hubby's 61st birthday and he reminisced about going to the revolving restaurant that used to be open on the 34th floor of the tower for his 21st birthday celebration.  The restaurant closed in 1980 and public access to the building ceased in 1981 although a number of people were lucky enough to experience the restaurant last year as the building celebrated its 50th birthday.