W is for Westminster

Westminster is on the Circle, District and Jubilee lines and is at the junction of Bridge Street and Victoria Embankment by Westminster Bridge. 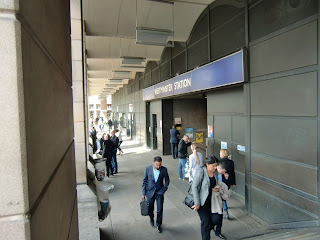 This is the entrance that it us underneath Portcullis House, an administrative building for Parliament.  The shot below is taken across the road looking at the building so it's hard to see the entrance.  There are several other entrances that are the often seen subway style. 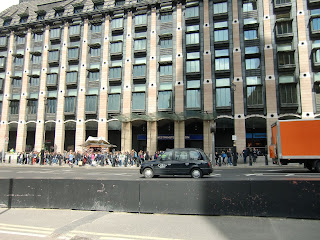 Westminster opened as a District Line station in 1868 with circle line trains being added soon after.  The Jubilee line wasn't opened until 1999.  The District line platforms are just below street level although these were lowered when the Jubilee line was added and the station was completely rebuilt.  If you do use this interchange to switch between the Circle & District lines to the Jubilee, be prepared for a long walk and to descend deep undergound!

The Jubilee line is a deep tunnel line and construction of this was challenging.  Many things had to be considered, not least its proximity to Big Ben.  A deep void was required to house the escalators leading down to the platforms and steps had to be taken to ensure the amount of vibration was within an acceptable level so that the Big Ben was not adversely affected.


Big Ben is actually the nickname for the big bell in the clock tower that forms part of the Palace of Westminster the home of the Houses of Parliament.  It is soon to be silenced as the clock, which has been in use for 157 years, needs renovation as does the tower, renamed the Elizabeth Tower in 2012 in honour of Elizabeth II's Diamond Jubilee.

Westminster is in the middle of a number of tourist attractions: The Houses of Parliament, Westminster Abbey, Whitehall and Downing Street to name a few.  Across Westminster Bridge you can also walk to the London Eye and then along the Southbank.


Thankfully the weather was better today and I was able to get out and take some photos.  It was busy with tourists and people trying to get money out of tourists including a bagpipe player on Westminster Bridge and an accordian player with a huge St. Bernard dog just outside the station.  Sorry, no pics of them.