L is for Liverpool Street


L is also for Lazy.  I could have chosen something a bit more exciting like Leicester Square, site of many red carpet premieres.  But Liverpool Street is the easiest L station to get to from home.  It’s a tube station on the Circle, Central, Hammersmith & City and Metropolitan lines plus a mainline station serving the East of England and Stanstead airport.

It’s 3 stops away from Forest Gate on the mainline and takes about 15 minutes to reach.  Trying to get a picture of this entrance in Bishopsgate was nearly impossible.  The other side of the road was too close and on this side I had to snap quickly in between buses going past!


This is the interior of the mainline station. 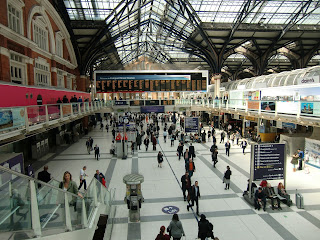 Which contains an entrance to the underground station. 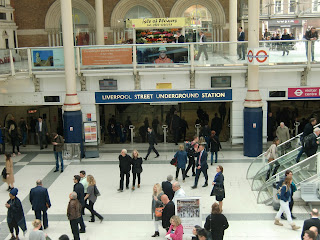 This picture (taken through a rather dirty glass panel) shows mainline trains waiting to leave. 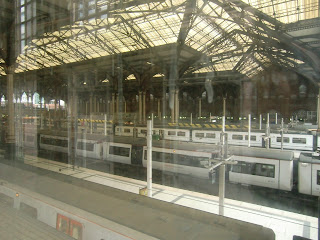 The mainline station opened in 1874 and the underground station opened in 1875.  It is another huge complex, the third busiest station in the UK.  It helps to know where you are going when you move through it at rush hour.  If we’ve been into central London we tend to come home using the mainline from Liverpool Street as you will always get a seat.  If we stay on the tube until Stratford and change there, we’ll often be standing for the last leg of the journey.


The wiki article on the station is really interesting.  It’s obviously changed over the years, sometimes for expansion and sometimes after events such as a daylight bombing raid during WW1 which killed 162 people.  There are several memorials at the station relating to both World Wars.

Liverpool Street was also the terminus that thousands of Jewish refugee children arrived at in the Kindergarten rescue mission just prior to WW2.  I managed to get a photo of the war memorial - although it's a shame that it's been spoilt by the installation of a lift on the left hand side! 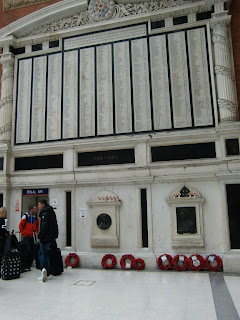 I couldn't get a photo of the Kindergarten statue - there were too many people sitting around it!  This one is courtesy of Wikipedia.

I had a bit of time today to explore around the station and found these two areas which city workers were making the most of at lunchtime - the weather was quite pleasant today.  Not hot, but dry and with some sunshine coming through.


Work to install the new Crossrail track/tunnels uncovered a burial ground that seems to have also contained a plague pit.  The area was excavated by the Museum of London Archaeology and finds also included artefacts dating back to Roman times.

I’ll be added more about Crossrail in future posts.