N is for North Greenwich


North Greenwich station lies at the northern end of the Greenwich peninsula and is served by the Jubilee line.  It opened in 1999 so is quite modern and fully accessible.  It also has its main building above ground unlike many central London underground stations where the main concourses are below ground and the only evidence of the stations below are the steps leading down with the family red and blue London Underground symbol.

I hadn’t been to North Greenwich station before.  It’s one of the largest on the Jubilee line designed to cope with the influx of visitors to the Millennium Dome as it was when originally built, now rebranded as the very popular O2.  (The annual entry and exit figures for the station from London transport for 2014 are quoted as 24.27 million and the station can cope with 20,000 passengers per hour.)

The O2 building is huge.  The arena is in the centre and although you can’t walk all the way around the arena as part of it is for access to backstage areas etc. there is a whole area that is just full of places to wine and dine.  I need to take hubby back there at some point but I think we could have difficulty choosing which restaurant or bar to visit.  The arena can be adapted to facilitate different types of events.  Concerts obviously.  (My son and his wife were lucky enough to see Adele there earlier this month.)  But also sporting events; it was a 2012 London Olympics venue.

The complex includes a cinema and bowling venue as well as a music club.  Some areas are still to be developed, although the introduction of a casino within the dome has hit many hurdles and hasn’t yet happened.  There are also no fast food outlets inside.
There are more restaurants in the pedestrian area outside the O2 building and nearby is the Emirates Airline cable car terminal which links the peninsula by cable car to Royal Victoria Dock and the Excel Centre on the northern side of the river Thames.  This was opened in June 2012. 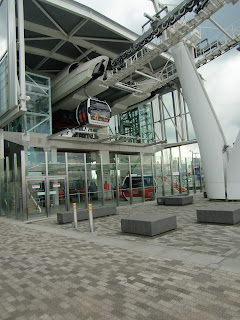 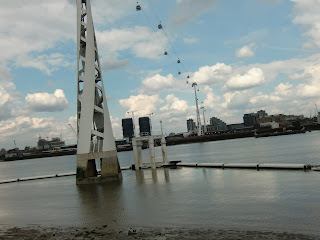 Another attraction that can be enjoyed (?) at the O2 is “Up at the O2” which involves climbing a walkway over the top of the dome.  This opened in 2012 and allows you to reach a viewing platform at the very top of the dome with great panoramic views of London.