M is for Monument

Monument station is linked to Bank Station underground and is served by the District and Circle lines.  It first opened in 1884.  It is another fairly non-descript station but it’s named after the nearby monument to the Great Fire of London in 1666. 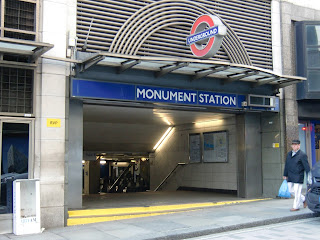 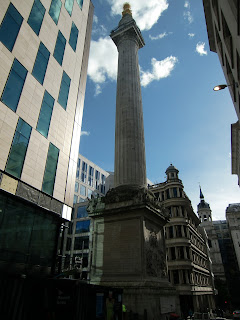 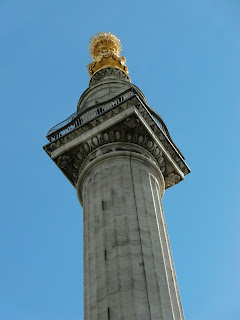 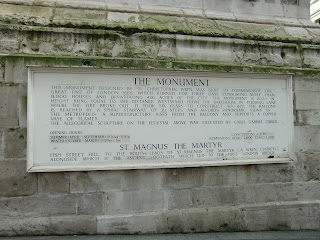 The monument was designed by Sir Christopher Wren, who also designed St. Paul’s Cathedral.  It was constructed over a 6 year period (1671 – 1677).  It took so long as it is constructed from Portland stone and there were difficulties in getting the right dimensions of stone.

It stands 202 feet high, the distance from the monument to where the Great Fire started, in Pudding Lane, and you can climb the spiral staircase inside, over 300 steps, to reach a viewing gallery.  It is the tallest stone column in the world.

The viewing gallery is now enclosed by a cage following a total of 6 suicides by people jumping from the gallery, the last in 1842.

My photos don’t really do it justice although we did visit on a nice spring day.  For more info on the monument you can visit the official site here.

We had a good wander around on the day I took these photos and the street below is where my hubby's old office is.  Again you can see the contrasting architecture in London - the old buildings opposite the end of the street with the moden "Shard" building in the background. 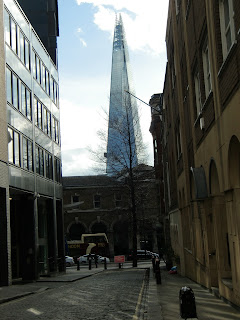 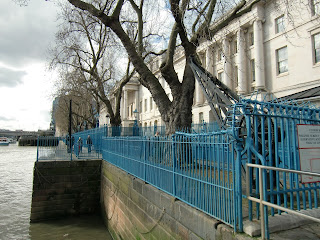 And this is the building he's working in now.  It's the current Custom House building the origins of which can be traced back to 1377.  It was known as Wool Quay for a long time as duties were levied on the export of wool.  The building has been rebuilt more than once.  It's now an administrative building for the merged government departments (Customs and Excise and Inland Revenue) that are now known as HMRC (Her Majesty's Revenue and Customs).  Unfortunately hubby's office is on the other side of the building so he doesn't have a view of the river.  To read more about the Custom House building go here.

Next stop N is for ...?  Check back tomorrow to find out.  Thanks for visiting.