P is for Piccadilly Circus

Piccadilly Circus Station is directly under the junction where Regent Street meets Piccadilly and the statue of Eros is located.  It's another busy station on the Piccadilly and Bakerloo lines opened in 1906.  It has no buildings above ground - the station concourse is reached by the familiar subway style steps. 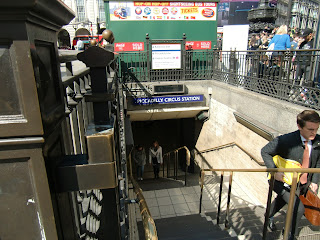 It was busy when we visited recently - a chilly but bright spring day.  People gathered around the statue as always.  Interestingly, when researching this post I discovered that it's actually the Shaftesbury Memorial Fountain, and although the statue is usually referred to as Eros it was actually modelled on his brother, Anteros.  You can read more about it here. 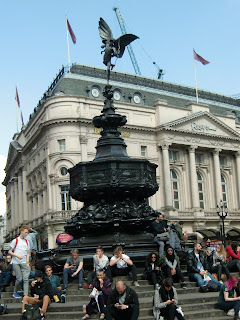 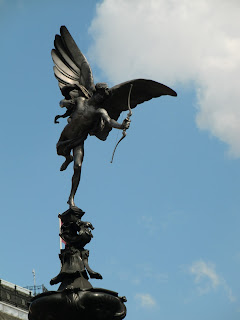 It was unveiled in 1983 and was the first statue to be cast in aluminium.  It is in commemoration of Lord Shaftesbury a prominent Victorian politician and philanthropist.  Shaftesbury Avenue which also leads off Piccadilly Circus is the heart of London's theatre district.  There are also major shopping areas nearby and entertainment making it a popular meeting place and tourist attraction.  It also has a large video display and neon signs on one corner.