A is for Angel


Not an angel as in something cherubic and with wings but Angel Station.  Yes  the theme for my A-Z posts this year is London Underground Stations.  I've chosen a station for each letter and at the end of each post I've listed the other stations for that letter with their Wikipedia entries.  I've tried to visit each station and take my own photos. 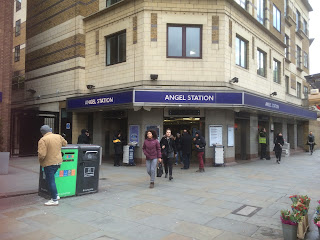 Angel Station is on the Northern Line of the London Underground and opened in 1901.  It is in Islington and named after a famous Angel Inn which dates back to 1638.  It’s not the first alphabetically on the list of London Underground stations but it’s the first that does have some significance for me.  When I first started full time work I was employed by Thames Water, the company that manages the water supply and sewage systems in London.  Fortunately I was an accounts assistant so didn’t have much to do with sewage.  (Although a visit to the local processing plant did factor into an induction programme!)

Angel Station was where you had to head for if you were going to the Head Offices of Thames Water.  It is not a station I enjoyed visiting for two main reasons.


Firstly there was just one central platform that ran between the North and Southbound train lines.  There was no nice safe wall for you to lean against when the station was busy to keep away from the platform edge.  And it is a busy station.  (For a view of how it looked click here.)

The second reason I disliked it was that the trains run very deep underground here and access to them was via lifts.  I’m not good in claustrophobic circumstances so this was torture for me.


However, on starting my research for this challenge I discovered that Angel Station had a major reconstruction in the early 1990s.  (My working days for Thames Water ended in 1986 following the birth of my first child.)

The station now has two separate platforms and they are reached by escalators.  Very long escalators!  It’s much less intimidating to me now.


I visited the station on 7th March and found the entrance was round the corner from the entrance I was familiar with.  Getting down to the platforms was much easier via the two escalators and I was much happier to have an all-important wall to lean on.


Another thing that has changed and increased over the years is the amount of advertising there is on the tube.  Moving down the escalators there are lots of adverts to see and I eventually managed to get a shot of this ad reminding people not to rush.  These ads seem to be pretty invisible to lots of people though.  Especially when going down as people are always rushing past you. 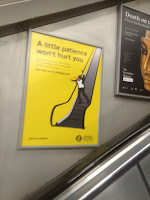 (As an aside Transport for London (TFL) are considering making some escalators standing only and will soon be starting a pilot scheme at Holborn Station - see here for the press release.)

If you want to see old pictures of the station you can check some out here:

Other “A” stations are: