T is for Tower Hill

Tower Hill Underground station is another rather nondescript London underground station, on the District and Circle lines.  It began life in 1884 as Tower of London Station as part of the Metropolitan line railway.  Two years later when works joined the Metropolitan and District to form the Inner Circle it closed and a new station was opened with the name Mark Lane.  This later became known as Tower Hill Station.  That station was rebuilt in 1967 and now stands on the site of the original Tower of London Station,  a few metres from one of the largest remaining segments of the Roman London Wall which formerly surrounded the historic City of London.  Yes London stations can be confusing. 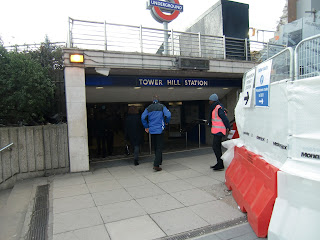 And often undergoing works as can be seen here when we visited in March.
Fortunately the nearby Tower of London makes it worthwhile coming here, especially as it was a sunny day if somewhat chilly. 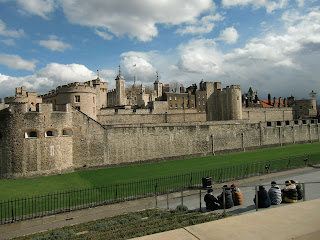 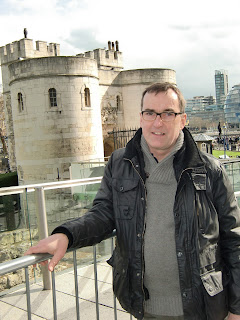 This is hubby.  When I talk about "we"  I'm usually including him.  I've been dragging him around London a lot lately but he has to do something now he's semi-retired! 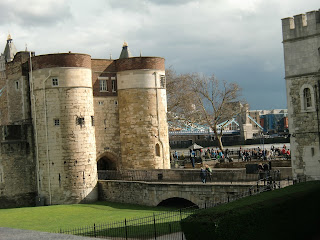 This shot shows Tower Bridge in the background (behind the tree).  It's clear I need to work on my photographic skills!
The image below courtesy of Wikipedia shows the ceramic poppies that were planted in the moat area of the Tower in 2014 to commemorate the centenery of the outbreak of WW1.  It became a major tourist attraction at the time, especially just before the poppies were removed and people rushed to see them.  It was a very unique display.

The Tower is definitely somewhere you should visit when in London.  We went years ago when the kids were younger.  It's a fascinating insight into London's history.  If you want to read more about it the official site can be found here or the Wikepedia entry which has a lot of information without the commercialism can be found here.