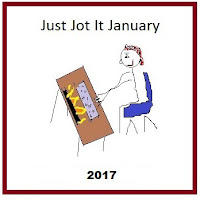 The prompt for Day 27 of the Just Jot it January challenge was Incomplete.  Pop over to our host Linda's site for full details.

The prompt was supplied by Cyn of That Cynking Feeling

Well my Just Jot it January log is incomplete and this post is a day late but I'm persevering!

For a long time I felt my family was incomplete.  I am the youngest of 3 children but due to the big age gaps between me and my elder brothers, I felt very much like an only child.  I'd always wanted to have children but I was a bit worried when I met and married my husband who was the eldest of 8 siblings.  Of course we discussed how many children we wanted and hubby insisted he would be happy with 2 or maybe 3 children.  I was of the opinion that maybe we could stretch to 4.  His family are a great example of  how good it can be to be part of a large family but I was relieved at his expectations.

After the birth of our first child, which was horrendous, (culminating in a mad dash to theatre for an emergency caesarean under general anaesthetic) I can remember quite clearly telling hubby, when our daughter was only about 3 days old, that he should make the most of her because I was never going through that process again!

Of course that didn't last for long and our two sons followed in quick succession.  Yep we are a Catholic family.  Actually I wasn't at the time which was probably a good thing when it came to birth control, because considering how easily I became pregnant if I'd been a practising Catholic we could easily have got to 8.

Suddenly I didn't have enough hands!  Even with the baby safely in the pram there were two other little bodies taking off, often in different directions.  3 children seemed enough.  Except I always thought an even number was better avoiding the prospect of a middle child.  For a long time I felt my family was incomplete, especially when several of hubby's siblings went on to have 4 children.

Eventually though, as our children got older and the gap between them and any fourth child grew, it became easier to accept that we were done.  And we have 3 great kids.  We are definitely NOT incomplete. 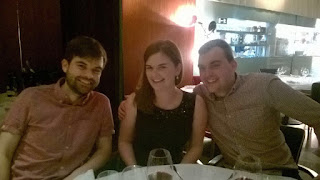 Email ThisBlogThis!Share to TwitterShare to FacebookShare to Pinterest
Labels: #justjojan